Where we are - Surroundings Venice Hotel 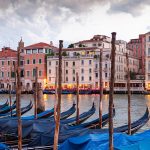 Facing onto the Canal Grande and Rio San Polo, Palazzo Barbarigo is less than a 5 minute walk from the San Tomà stop, where the vaporetto water taxis arrive from Piazzale Roma and the train station headed for St. Mark’s Square, the Rialto and Lido.

The Basilica dei Frari is one of the most wonderful examples of Gothic style in the city. Inside, this splendid cathedral hosts various works of art and the remains of the composer Claudio Monteverdi, one of the greatest artists of the late Renaissance. Just a short distance away, stop by to visit the nearby Church of San Rocco.

Take the vaporetto which stops at San Tomà to reach the Rialto or St. Mark’s in just a short time. Rialto, the famous bridge and its marketplace represent Venice’s ancient commercial soul. Still today, this district is replete with osterie, restaurants and cafés at which to drink a classic spritz and spend a fun evening. St. Mark’s Square on the other hand is the world’s most beautiful and enchanting salon under the stars; take a stroll under the tall bell tower and alongside the mosaic facade of the Basilica for a truly memorable experience.

Accommodations at Palazzo Barbarigo provide a convenient starting point for all of Venice’s artistic venues: Palazzo Grassi, the Guggenheim Foundation, Ca’ Rezzonico, the Gallerie dell’Accademia and the Pinault Foundation are all along the vaporetto’s route heading towards St. Mark’s Square. A mere twenty minutes later, the boat arrives at the Lido di Venezia – the home of the prestigious Cinema Festival – an otherworldly place, with its art deco styled residences and a coastline that has made history.